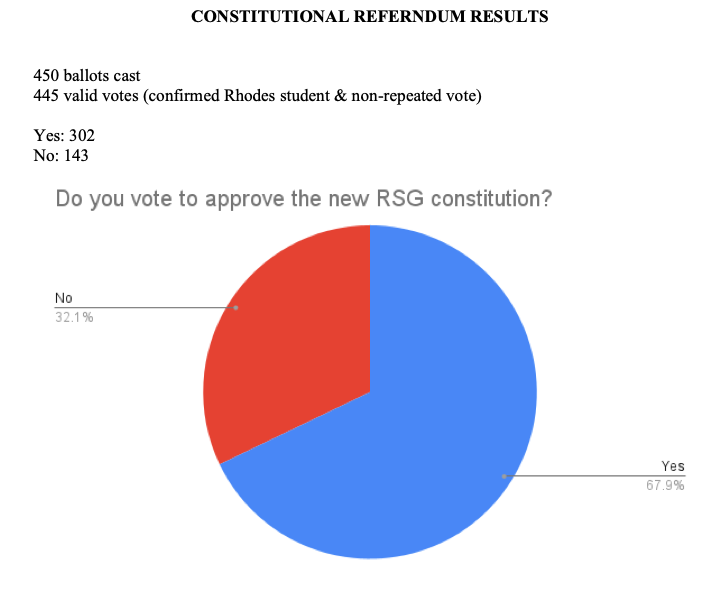 On February 22, 2022, Rhodes Student Government (RSG) successfully passed a new constitution, but not without great backlash from students across campus and the Community Standards Council (CSC). Some students raised questions regarding the integrity of the election, making anonymous comments on forums such as Yik Yak, saying, for example, “Vote yes, RSG wins, vote no, CSC wins. There is no winning for the average student.”

This new constitution drew controversy, as it merged two judicial branches of RSG. This added to the attention that was brought to problems within the voting system at Rhodes and led many students to question the validity of the entire process. The system of voting in RSG has been untouched since the most current constitution was drafted and put into effect in 2017, and it took an RSG organization, CSC, to publicly voice their opinions to finally raise questions about democratic integrity of RSG procedures. In an Instagram post, CSC says, “Community Standards Council leadership was verbally accosted by members of the Rhodes Student Government,” and they claim they were treated with disrespect and disregard in this process.

The results of this vote, in Figure 1, show 445 votes were counted. This number represents 22% of the student body. The 302 votes approving the new constitution represent 15% of students in total. There is no minimum requirement for the number of votes needed for the system to be efficient. 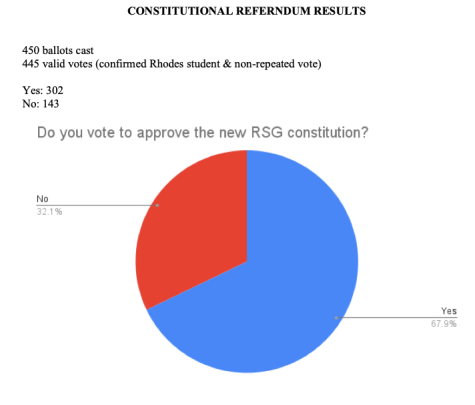 With the constitution vote receiving just above 2/3 of the votes, CSC President David Caddle commented, “this is a big issue for that many people to have voted “No” out of so few students who voted overall.” He said voter turnout and quorums are essential in any form of voting process, which Rhodes lacks.

Unlike some other colleges, the Rhodes constitution does not require a minimum percentage of the student body to vote for the counted votes to be legitimate. Sewanee’s student government constitution, for example, states, “The amendment shall be made if such a referendum yields a two-thirds majority of voting students in favor of the amendment, with at least one-half of the student body voting or actively abstaining.” The RSG constitution states, “The amendment shall be passed and take effect upon receiving the affirmative vote of the majority of votes cast.”

In addition to concerns brought up by CSC, student body president John Howell has also raised concerns with the voting process. President Howell says for as long as he can remember, voting in elections and for amendments is active for 12 hours. President Howell mentioned he can see how this process may prevent students from taking their time to evaluate the decision they are making and to be fully informed.

In their statement, CSC alleged voters are intimidated from voting against the new constitution by RSG members and those on the elections commission team. On the Google forms page, where students cast their votes, students are asked for their full names, as well as R numbers. When I met with Howell, I learned that after the voting closes all names and votes ever recorded are kept in a vault where only the Student Body President and the active election commissioner have access. President Howell said, “We’ve taken names always. We don’t publish names ever, but in our old results, we have elections with students’ names attached to their vote going back into the early 2000s.”

However, a student who asked to remain anonymous reported being asked to explain their vote against the Constitutional amendment by the election commissioner, Jack Burt, the day after the vote closed. The student said the confrontation occurred in the Refectory dining hall, where Burt reportedly said, “I saw you voted no in the election. What’s up with that?”

“So now, after you make your own decision to vote no, you have to then explain yourself as to why you voted no during an election,” Caddle said. “I’m not a sore loser, who would say ‘oh this was rigged,’ but the thing is, this time it was.”

When President Howell received word of this, he said, “disclosing individual votes is unethical and RSG doesn’t condone that.”

In an interview I conducted with Abrams, I asked about the claims of CSC being silenced before the vote. Abrams said, “I do not in any way feel that this process has infringed on CSC’s rights to voice its opinion on the new constitution.” Howell also explained that this process took many meetings with the executive board of RSG, and as CSC President, Caddle is a member, and a vote from the executive board passed the constitution to the senate. “I claim misinformation caused much of the backlash,” Howell stated.

It was also brought to light, by the anonymous student, that some students feel as though RSG, and the strong presence of the Sigma Nu fraternity in RSG, has created a “huge social pressure” on campus. Sigma Nu members hold the position of President, Vice President, Election Commissioner, Allocations President, and other Senate seats, which gives their fraternity much power over the functioning of RSG.

This Wednesday, April 7th, RSG will be conducting the elections for next year’s positions, including the Student Body President faceoff between CSC President David Caddle and Student Body Vice President Cameron Abrams. Students will be given 12 hours to vote on the electronic ballot, however, due to these voting issues that have been brought to light, Howell is working with the administration to get names removed from the electronic ballots. While it is uncertain if this attempt will be successful with elections today, it is notable that RSG is already beginning to take steps to correcting its voting system, by removing the requirement of names on the ballots for this election. The chaos of the constitutional vote, on February 22, can only be a precursor to the events that will unravel today. With a new election commissioner appointed to this election, it will be interesting to see how the results unfolds.